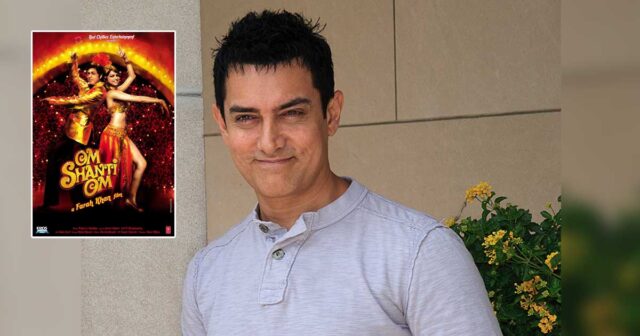 Deepika Padukone made her stunning debut in Bollywood opposite Shah Rukh Khan in Om Shanti Om in 2007. The film was a bumper success at the box office and a lot of B-town celebrities made a cameo in the song ‘Deewangi Deewangi’ except for Aamir Khan. Well, Farah Khan once revealed the reason behind Aamir not making it to the cut. Scroll below to read the scoop!

This was the second time after ‘Main Hoon Naa’ that SRK and Farah collaborated on a film.

The successful track ‘Deewangi Deewangi’ was composed by Vishal-Shekhar in Om Shanti Om. The song soon became a national rage and was played at every event no matter how big or small. Shah Rukh Khan danced with different B-town celebrities including Salman Khan and Saif Ali Khan.

Reportedly, Aamir Khan was also supposed to be a part of Shah Rukh Khan’s ‘Deewangi Deewangi’ but that couldn’t happen for a valid reason.

At IFFI in 2019, Farah Khan revealed, “I wanted Aamir (Khan) in it. I wanted one shot to have the three Khans together. Aamir drove me crazy for ten days. He couldn’t make it because he was editing ‘Taare Zameen Par’”.

Imagine how fun it would have been if Aamir had been a part of the song too.

Om Shanti Om marked the debut of Deepika Padukone and ever since then there has been no looking back for the actress and she’s one of the highest-paid actresses in B-town.

What are your thoughts on Aamir Khan not being a part of SRK’s Om Shanti Om? Tell us in the comments below.