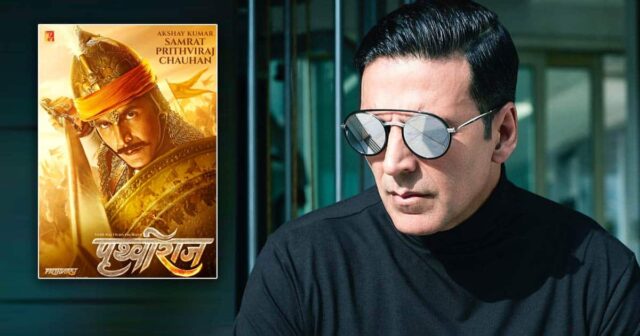 Bollywood star Akshay Kumar is gearing up for the release of his historical film ‘Prithviraj’.

Given the subject, director Chandraprakash Dwivedi wanted the film to be the most authentic representation of Samrat Prithviraj Chauhan’s life and for that Yash Raj Film’s head honcho, Aditya Chopra converted an entire floor YRF into a research wing for the film.

Akshay Kumar shared: “When I was narrated the film by Dr. Saab, I was taken aback by the amount of research that he has done while writing this film. Writing and directing a historical is not an easy job and I was deeply impressed that he has left no stone unturned to ensure that we are paying the most glorious tribute to Samrat Prithviraj Chauhan’s life and valour.

The film is based on the life and valour of the fearless and mighty Samrat Prithviraj Chauhan. Akshay is essaying the role of the legendary warrior who fought valiantly against the merciless invader Muhammad of Ghor

Akshay Kumar said: “He waited for 18 years of his life nurturing and making Prithviraj the most glorious retelling of the Samrat’s life! I hope that people love this film and it becomes the most authentic reference point for the mighty king’s life.”

The film’s director shared that they wanted to pay the “biggest and the most glorious tribute to Samrat Prithviraj.”

“We did everything necessary to ensure that we were making the most authentic retelling of the life and times of the mighty Hindu warrior! Step one to attempt such an extravagant historical is always research and we wanted to be absolutely thorough and accurate.”

Dwivedi had personally worked on the script from 2004 to 2019 “updating the script” every year.

“So, naturally, I had a lot of material that could be used as reference points to write the final draft of the film and it could also be used as additional literature for us and the actors to revisit during the course of its making the film.

“There were several books, a variety of costumes that were being used as references, armour and weapons, etc. that were brought into YRF before the filming started.”

He added: “There were so many items that Aditya Chopra converted an entire floor of YRF into a research wing for ‘Prithviraj’.

“We kept the research bay fully operational till the last day of shoot! Now, we are exploring a plan to showcase all this research work to people and the teams are working to see how best they can display this research so that people understand the magnitude of work that was undertaken to give the best possible salute to the glorious king Prithviraj.”

Debutante Manushi Chhillar will be seen playing the role of King Prithviraj’s beloved Sanyogita and is marking her debut with the movie.

‘Prithviraj’ is set to release on June 3 in Hindi, Tamil and Telugu.

Must Read: When Pooja Bhatt Revealed Declining Aashiqui’s Offer Because Of Her Boyfriend, “Being A Romantic Person, I Said I’ll Do Anything For Love”