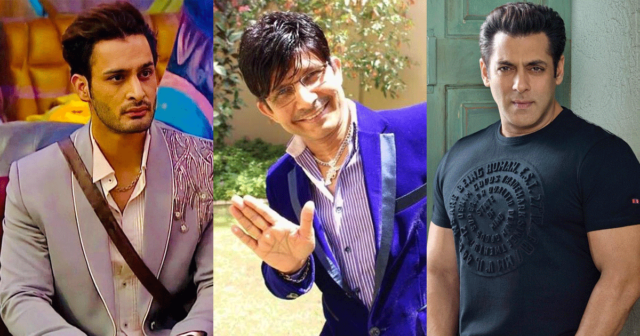 Salman Khan hosted Bigg Boss 15 has been on the news for various reasons, from contestants fight to eviction during the Weekend Ka Vaar episode. Meanwhile, in the latest episode, Umar Riaz was shown the exit door due to his unruly behaviour in the house, but viewers aren’t so pleased with the decision. On the other hand, Kamaal R Khan aka KRK who never shies away from speaking anything took an indirect dig at Radhe actor.

Meanwhile, in yesterday’s weekend episode it was announced that the show will be getting extended for two more weeks and contestants still have to fight to win the Ticket To Finale.

Post Umar Riaz’ eviction from Bigg Boss 15, netizens called out makers for being unfair and declared him as the public choice winner. While KRK who participated in the earlier season targeted Salman Khan and claimed that he hate outsiders.

For the unversed, Umar Riaz was shown the exit door due to his aggressive behaviour towards fellow contestants, especially Pratik Sehajpal. Although Bigg Boss along with Salman Khan has warned him multiple times but there was no improvement in his nature.

After the makers announced the season’s extension for two more weeks, there were reports that claimed earlier evicted contestants like Rajiv Adatia and Vishal Kotian might be entering the house again, but there’s no confirmation about it.

Let us know in the comments about your views on Bigg Boss makers and Salman Khan’s decision to eliminate Umar Riaz?

Must Read: Kapil Sharma Almost Gave Up On His Relationship; Told Ginni Chatrath, “The Car You Come In Costs More Than What My Entire Family Is Worth”