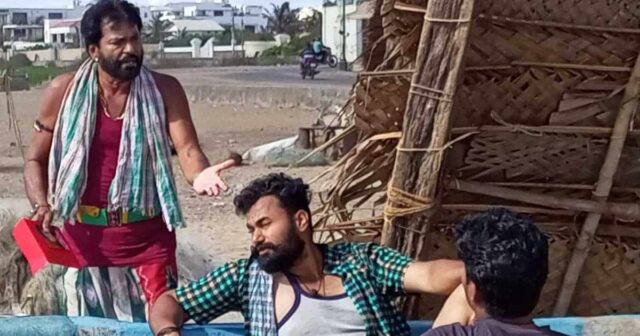 Well-known actor Charan Raj’s younger son Dev, a pilot by profession, is to make his debut as an actor through his dad’s upcoming film ‘Kuppan’.

Charan Raj, who has acted in over 600 films in Tamil, Telugu, Kannada, Malayalam, Odia and Bengali, is returning to the film industry as a director through ‘Kuppan’.

‘Kuppan’ is named after a man, whom Charan Raj says he befriended during his morning walks.

Says Charan Raj, who has penned the story, screenplay and dialogues for his film ‘Kuppan’, “I have been living in Palavakkam for over 35 years and I go for walks with my dog on the seashore every morning. During my walk, I would chat with several people on the way and return home. It was on one such walk that I got introduced to a fisherman named Kuppan. My interactions with him made me want to pen a story on the fisherman. So, after finishing the script, I named the film after my friend. He has also acted in a small role in the film.”

Dev Charanraj, who is the second son of Charan Raj, was a pilot. He underwent special training at an acting school before turning hero.

Aadhi Dev is making his debut as the other hero. Along with them, Sushmitha Suresh and Priyadarshini Arunachalam are also making their debut as heroines.

Charan Raj is also acting in an important role after a long time. He plays his son’s uncle in the film.

Sources say ‘Kuppan’ will be a love story that will revolve around a young fisherman and a north Indian girl in a village.

Cinematography for the film will be by Janarthan and editing will be by SP Ahammed. Along with Charan Raj, ‘Kuppan’ which is being co-directed by K Suresh Kumar, will have music by SG Elai.

Must Read: Vijay Sethupathi Is Truly A ‘Makkal Selvan’ As He Waits Back For An Hour To Click Pics With Fans Every Day!