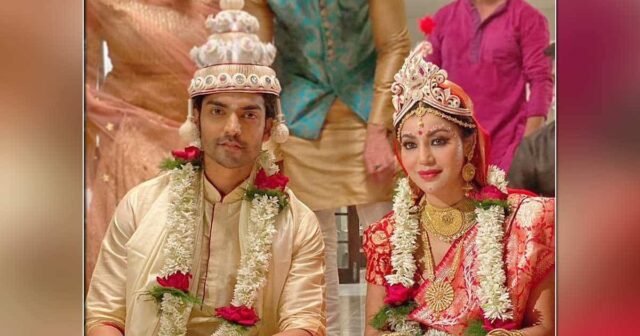 Debina Bonnerjee and Gurmeet Choudhary fell in love while playing Ram and Sita on the mythological show, Ramayan. Following that, the duo got married in 2011 and have since been giving all couple goals. Recently, pictures of the duo dressed in traditional Bengali wedding attire when viral and fans couldn’t keep calm.

While the actor’s originally got married in a low-key temple wedding 10 years ago, these ‘wedding’ pictures made fans wonder if the couple had renewed their vows with a Bengali ceremony. Well, Debina had put those speculations to rest by finally opening up about it. Read on.

During a recent interaction, as reported by Hindustan Times, Debina Bonnerjee has she’s light on her and Gurmeet Choudhary’s viral wedding Bengali wedding pictures. The actress said, “It was just a reel wedding for our short film, but we almost kind of did it (rituals) again.”

Continuing further, Debina Bonnerjee says, “Our director (Ram Kamal Mukherjee of Subho Bijoya) is also a Bengali, and he knew all the nitty-gritty of a Bengali wedding. Everything was arranged from Kolkata. The outfit which Gurmeet was wearing was a special groom’s attire which came from Kolkata. It didn’t feel like we were shooting.”

Debina revealed that getting married again on-screen brought many memories back. The actress said, “At that time, we both were so mesmerised. The whole evening we just kept talking and just clicking videos and pictures. In fact, I have even kept the bride’s attire from the shoot with me.”

So are there plans to renew their wedding vows, this time with a Bengali ceremony? Debina Bonnerjee quips, “No, abhi toh reel hi theek hai, abhi we don’t plan to do anything like that, and it is also not a wise decision to hold a wedding during the ongoing pandemic.”

Talking about reuniting with Gurmeet Choudhary on sets after a long time, the actress added, “It was such a different experience from what happened 11 years ago. We were immature, used to keep laughing and fighting. While working this time, I realised that we have matured as an actor. There was no motive to overwhelm the other actor with your acting, and we were giving each other space to deliver, that was the best part.”

Did you think the viral Bengali wedding pictures of Debina Bonnerjee and Gurmeet Choudhary were real or reel? Let us know in the comments.

Must Read: Ronit Roy Talks About The Doomed Days After A Successful Debut: “Made Wrong Choices & Ended Up Having No Films”