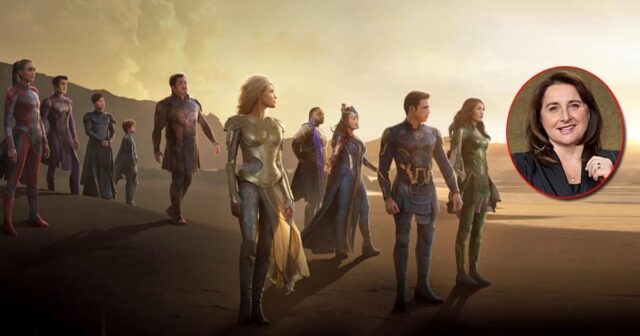 While Marvel’s latest release Eternals got negative reviews from the critics, it’s still winning the hearts of fans all over the world. Now, Marvel Studios’ executive Victoria Alonso has reacted to the film getting negative reviews and supported the LGBTQ community portrayal in the film. Scroll below to read the scoop.

For those of you who don’t know the film was banned in Saudi Arabia, Qatar, Kuwait, Bahrain and Oman after the makers declined to cut the same-s*x intimacy scenes.

According to Variety, Victoria Alonso was felicitated with Visionary Award at the Outfest Legacy Awards on Saturday night where she took the opportunity to mention the Eternals’ critics in her speech.

The Marvel Studios’ executive further added, “Diversity and inclusion (are) not a political game for us. It is 100 per cent a responsibility because you don’t get to have the global success that we have given the Walt Disney Company without the support of people around the world of every kind of human there is.”

Meanwhile, Eternals is the first Marvel film that has shown the same-s*x marriage between Phastos and Haaz Sleiman. During the press conference, Angelina Jolie said, “I’m sad for [those audiences]. And I’m proud of Marvel for refusing to cut those scenes out,” as reported by news.com.au.

We don’t know about the critics but we certainly did love Eternals.