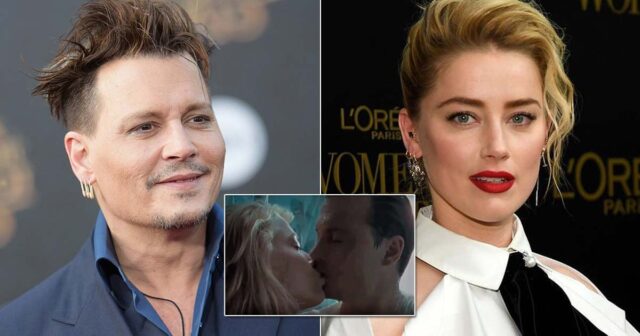 Johnny Depp and Amber Heard’s legal battle is getting uglier by the day. There have been spine-chilling revelations from both sides that have come as a surprise to all their fans. Amid their defamation trial, a video of their kiss from their first film together ‘The Rum Diary’ is going viral and netizens are now reacting to it. Scroll below to watch it.

An Instagram page named ‘Movie_gasm’ shared the clip on their official Instagram page with a caption that read, “he KISS that ruined everything #JohnnyDepp and #AmberHeard in The Rum Diary (2011) IMDB – 6.1 dir. Bruce Robinson.”

The caption continued and read, “Johnny Depp and ex-wife Amber Heard first met while making this film. They became a couple in 2012 after Depp separated from his longtime girlfriend Vanessa Paradis, were married in February 2015, separated in May 2016 and officially divorced in January 2017, after a very public court battle, which was reignited in 2019 when Depp sued Heard for defamation. #TheRumDiary”

Take a look at their kiss here:

A post shared by more than just Movie Quotes (@movie__gasm)

Reacting to Amber Heard and Johnny Depp’s kiss from ‘The Rum Diary’ a user on Instagram commented, “The kiss that costed 60 million dollars” Another user commented, “A celebrity couples dirty laundry being washed out in public. Classic.” A third user commented, “Damn he should have stayed with his ex 😂” A fourth user commented, “WAIT THIS KISS COSTED HIM A FINGER 😂”

Meanwhile, social media is divided into two parts amid Amber & Johnny’s legal battle. Their fans are pouring so much and love supporting them as they’re going through crises in life.

Whose side are you on – Johnny Depp or Amber Heard? Tell us in the comments below.

For more updates, stick to Koimoi.

Must Read: Megan Fox & Machine Gun Kelly To Undergo Exorcism After Drinking Each Other’s Blood? Here’s What A Catholic Priest Has To Say!