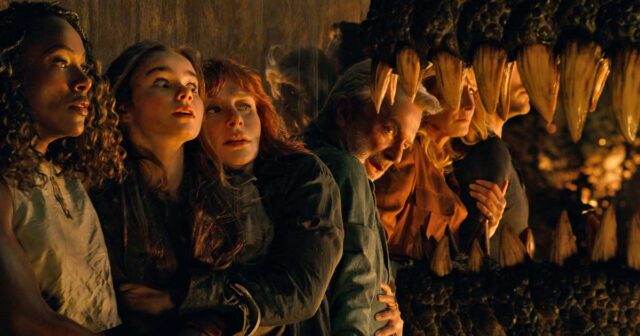 After seeing an early release on Thursday evening and getting a good push over the weekend, Jurassic World: Dominion struggled to reach the 50 crore mark by the close of extended first week. The film should have ideally sprinted after that double-digit jump on Saturday followed by a stable Sunday. However, that didn’t quite happen as the collections came to 49 crores*.

As such, given the scale, size and franchise popularity, this one was a clear 100 Crore Club film in the offering, which means the first week should have comfortably surpassed the 65 crores mark. However with that not happening; the film will stay much lower than that and at best touch 75 crores. In what seems more practical is 70 crores but then since the film has premium screens (IMAX, 3D, 4DX) available for itself, there is always an advantage that can get big-screen enthusiasts into theatres.

The film is of course better than majority of Bollywood releases of the year, barring three or four, and hence Hollywood can well stand up and claim that they are doing good enough in India. That’s a fair statement to make as well, but then strictly from relative standpoint. As a stand-alone film, Jurassic World: Dominion had all the resources available (screens, no competition) to come up really trumps, which it hasn’t.

Must Read: Johnny Depp Spent A Whopping $100,000 On The Wedding Ring He Bought For Amber Heard & The Massive Solitaire Has Left Our Eyes Popping! – See Pics!