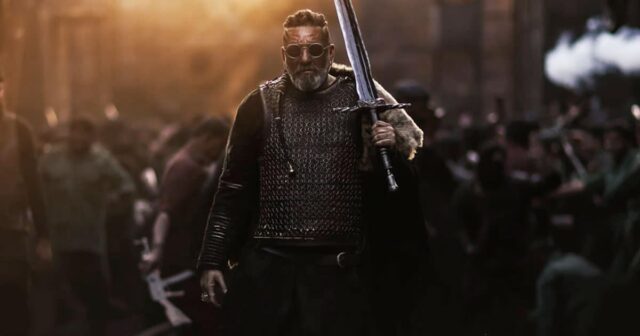 Actor Sanjay Dutt has been on a roll as he has some interesting projects in the pipeline. Among all his upcoming films, the audience is excited about KGF Chapter 2, featuring south superstar Yash. For the movie, Dutt has transformed himself into a never before seen avatar. As per reports, the movie will be high on action and the All The Best actor has strictly advised the makers that he will be shooting his own stunts without using body doubles.

Meanwhile, a source close to the development told ETimes, “There are elaborate action sequences in KGF 2. The movie’s first part starring Kannada superstar Yash set a certain tone and the brief was to make the sequel grander. When Sanjay Dutt said he would shoot sans a body double, the production team had tried to dissuade him, citing safety reasons. But he held his ground because he felt Adheera’s menacing quality will lose touch if he doesn’t do the action scenes himself.”

Following the actor’s order to perform his own stunts in the movie, KGF Chapter 2, the team would walk Sanjay Dutt through each stunt, keeping in mind his total safety, the source adds, “The stunts were storyboarded and broken down before being filmed. Apparently, the action sequences have this haunting quality, which was executed skillfully by Sanjay.”

As per earlier reports by Bollywood Hungama, the actor made sure every modification in the stunts are stopped. As he feels it is an insult to him if they cheat and change things for him.

The source claimed that KGF Chapter 2 makers’ main concern was Sanjay Dutt’s health, the team wanted him to work in a safe environment, “Yash and director Prashanth Neel suggested that Mr Dutt’s stunts should be simplified. But he wouldn’t hear of it. ‘Don’t insult me by suggesting that I’m not capable of doing the action scenes. I will do them exactly the way they were written, no compromise, no cheating’ He proceeded to do the stunts all by himself, even the more dangerous ones he refused a body double. And he did them perfectly.”

The movie is a sequel to the 2018 film KGF Chapter 1, part 2 is scheduled for a theatrical release on April 14, 2022, in Kannada, Telugu, Hindi, Tamil and Malayalam.

Must Read: Pathan: Shah Rukh Khan Is Making A BTS Series About His Transformation In The Film? Exciting Deets Inside

Be a part of our community to get the latest Tollywood news, Kollywood news & more. Stick to this space for the regular dosage of anything and everything entertainment! While you’re here, don’t hesitate to share your valuable feedback in the comments section.