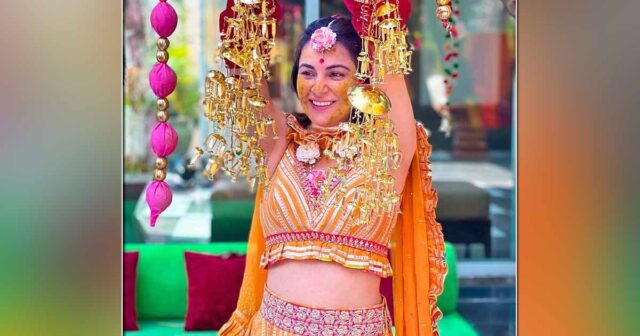 Amongst several celebrities making headlines for the past few weeks over their impending ‘big fat’ wedding, Television actress Shraddha Arya managed to keep her wedding news a secret until the last minute. She surprised everyone with her wedding news recently.

Now several photos and videos of Kundali Bhagya actress‘ wedding are doing rounds on social media. The actress got married to a Delhi-based Naval officer, Rahul Sharma on November 16. She looked absolutely stunning on her special day in a traditional red embellished lehenga with heavy accessories.

In a viral video, Shraddha Arya is seen making a typical Bollywood-style entry for her wedding rituals and asked her husband Rahul Sharma to carry her in his arms in front of everyone. Her husband immediately obliged her request and carried her in his arms. The actress couldn’t stop herself from kissing him on his cheeks. Take a look at the video below:

In another video that went viral, Kundali Bhagya actress is heard joking seen telling her friends, ‘Mujhe yaad karna doston’ and ‘Bohat jalna mere doston’ as she can’t stop laughing saying it. The video appears to be from her ‘bidai’. Take a look at the hilarious video below:

Shraddha Arya’s industry friends Anjum Fakih, Neha Adhvik Mahajan and several others also attended her wedding which was held in Delhi. She was seen wearing a yellow outfit with floral accessories at her Haldi ceremony that was held on November 16. The actress had also shared pictures on her Instagram handle.