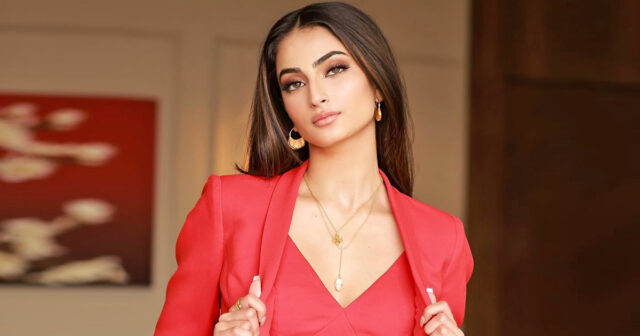 Before making her big Bollywood debut, Palak Tiwari is already creating a buzz with her public appearance, music videos and social media posts. Although her popularity has grown tremendously, but it wasn’t easy for her to create her place in the industry. Being a daughter of Shweta Tiwari, she has faced trolls as people sometimes call her out for nepotism. In a recent chat, Palak opened up about the same and talks about rejections she has faced.

Last year in October, the actress featured in Hardy Sandhu’s music video, Bijli Bijli which went viral like a wildfire. The song helped her showcase her talent for which she received a lot of appreciation. Meanwhile, she’ll soon make her big-screen debut with, Rosie: The Saffron Chapter.

In a recent conversation with Bollywood Bubble, Palak Tiwari spoke about facing rejections, she told, “People don’t like to hear it from me, because people have this notion that anyone that’s related to someone, who has made it- is privileged. I won’t deny that, maybe that privilege is there in certain areas but I have auditioned a lot in my life. As someone who is the daughter of a television actor, that doesn’t have all the boons that you think it will.”

“I have auditioned a lot and have got rejected for ads, there was a point in my life, from 2016 to 2018, I was only auditioning every single day in Lokhandwala, I used to sit in that line and I used to audition with my intro and all. Kuch nai hua. During that process, I got my first ever ad, which is still on my Instagram,” Palak Tiwari added.

Talking about being compared to her mother Shweta Tiwari and people trolling her on nepotism, she shares, “In this industry, I believe that outsiders are marginalised and to a sense that is true, maybe sometimes they are overlooked. But you know there are equal cons I would say of being related to someone that has made it. More than anything else, just the pressure of living up to what they have created and the love that audiences have for them.”

Palak Tiwari explains further and says, “I know, that no matter what I do, people will always think that my mom is better and that is something that I have never refuted in my life and I will never because she is better. I am a part of her. I am a much smaller part of her. So for me to grow where she is, it will take me a lot of time. But also, my mom had a lot of struggles in her life from a young age.”

The actress also comments on her mother Shweta Tiwari’s struggles, “One thing that I just want to put out there, people may or may not accept it. People, who have worked so much just like my mom who came from nothing, next to nothing and she worked her way up. Would it be fair, if out of that, she gave her daughter nothing? All of that work of hers is gone in vain.”

“Your parents do this so they can make a more comfortable life for their children. You think you are shaming the child, but you are shaming the parent. They have worked so hard. Unka hak banta hai ki woh apne baccho ko thoda provide karein. You can’t take that away from them,” Palak Tiwari concludes.

Stay tuned to Koimoi for more such stories.