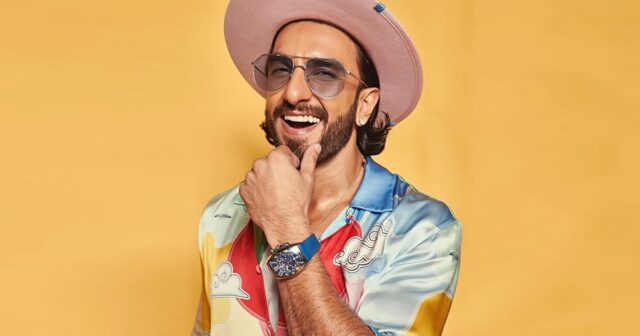 Bollywood actor Ranveer Singh is now gearing up for the release of his upcoming film Jayesbhai Jordaar. However, today the actor isn’t making headlines for his upcoming film, but for his funky fashion choice during Salman Khan’s sister Arpita Khan’s Eid bash.

This isn’t the first time Ranveer has made news for his fashion choices. Some find it super cool, while some subject him to brutal trolling for it. However, his recent look has become the topic for discussion. Read on.

Salman Khan’s sister Arpita Khan had recently hosted a huge bash on the account of Eid. It was a star-studded party and witnessed many celebrities attending it. Out of them all, the one who caught quite some attention from the media was Ranveer Singh and his wife Deepika Padukone.

While everyone including Deepika Padukone followed the theme of the bash by donning black outfits, Ranveer Singh was seen rocking a colourful shirt, which gave a good amount of glances at his chiselled chest for the fans. He paired the multi-coloured shirt with a pair of denim and completed his party look with a baby pink coloured hat.

Now, we got to give it to him that he was looking smoking hot in that look. But, yup, it for sure wasn’t an Eid party wear. While many lauded the actor for once again rocking his out-of-the-box look, the Padmaavat star also fell prey to immense trolling by netizens.

For more such amazing updates make sure to follow Koimoi.