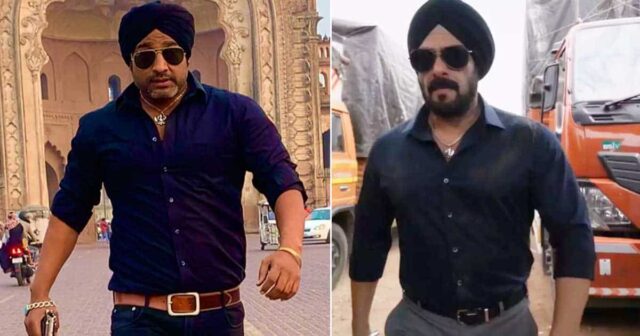 Bollywood superstar Salman Khan enjoys a massive fan following not just in India but also overseas. Many of his fans travel the distance just to get a glimpse of him only some lucky ones get a chance to meet him. Some even take inspiration from him and become a doppelganger.

One such doppelganger is Azam Ansari who often makes reels on Instagram on the roads and monuments of Lucknow. Now the Salman doppelganger has landed in trouble and has been arrested by the Lucknow police on charges of disturbing peace.

As per the latest report from News agency IANS, Salman Khan’s doppelganger, Azam Ansari was making a reel at the historic Clock Tower on Sunday night. A huge crowd was gathered to see him which resulted to a massive traffic jam. Some commuters later filed a complaint against him.

Lucknow police rushed to the spot and took Ansari into custody and have been booked under Section 151 for breach of peace. He now enjoys 1.67 lakh followers on YouTube.

Meanwhile, Salman Khan recently made a stylish entry at the ‘Dharmaveer trailer launch event. It was star-studded, as Maharashtra CM Uddhav Thackeray, Aditya Uddhav Thackeray, Riteish Deshmukh, Bhagyashree, and Gulshan Grover, among others, attended the event.

Salman will be next seen in Tiger 3 which is being helmed by Maneesh Sharma. The film will also see Katrina Kaif and Emraan Hashmi. The Bollywood superstar will also be seen in Kabhi Eid Kabhi Diwali alongside Pooja Hegde. The film is also said to star Bigg Boss fame Shehnaaz Gill.