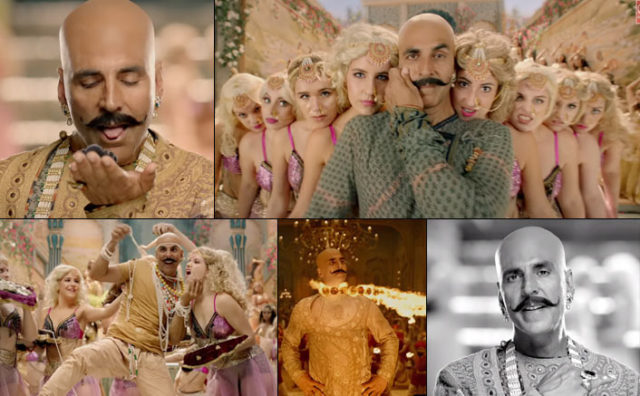 Housefull 4 is a joyous ride for the fans already with the fun trailer, and the quirky song Ek Chumma being well received. Now, another song from the movie – Shaitaan Ka Saala starring Akshay Kumar, Kriti Sanon, Riteish Deshmukh amongst others in lead is out and it’s cracking us up!

Shaitaan Ka Saala is like an introductory song for Akshay Kumar which features the actor in a hilarious 1419 avatar as ‘Raavan’. The song showcases Akshay Kumar’s 1419 version with his father being a king seeming to be tired of his womanizer habits. Bala ‘Shaitaan Ka Sala’ in the entire song is having a gala time around girls. There are some hilarious moments with Akshay’s tremendous expressions, a glimpse of Kriti Sanon. The song is filled with entertainment and we’re sure that Housefull 4 is going to be ’10 times more’ entertaining as promised by the makers. Watch the video below:

Yesterday, the makers treated the massive Housefull 4 fan base with the teaser which witnesses a twist to Tony Montana’s original song, Bala. The teaser of the song Shaitaan Ka Saala burst into laughters as it got the lead Akshay Kumar bringing a twist to Montana’s track which is all about being sexy and fun! On the contrary, this desi twist of Akki’s character in his 14th century’s ‘Ravana’ avatar in the way that there are 9 girls, face to face stuck with him just like Ravana’s 10 heads in total. It’s as hilarious as it could ever be, and the actor’s expressions and funny dance moves are literally winning over the Internet already!

Meanwhile, Housefull 4 also stars Kriti Sanon, Kriti Kharbanda, Pooja Hegde, Bobby Deol and Riteish Deshmukh in lead. The movie will witness each of them in double roles, one from their 1419s and the other from their 2019 avatars!

Housefull 4 is directed by Farhad Samji and backed by Sajid Nadiadwala under his production company, Nadiadwala Grandson Entertainment (NGE). The movie will hit the screens this Diwali.