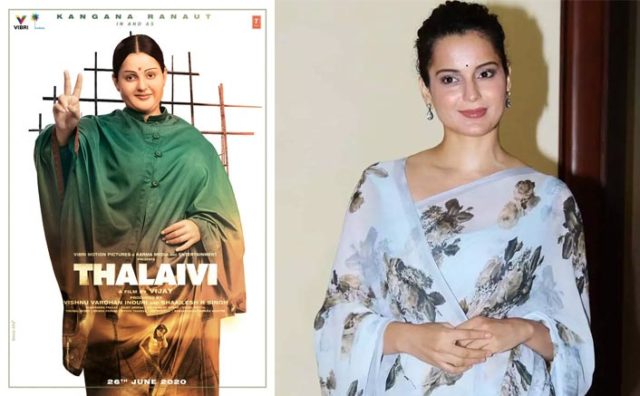 Thalaivi poster is here & it screams attention to details. Kangana Ranaut is all geared up for this upcoming biopic based former Tamil Nadu’s Chief Minister Jayalalithaa’s life. She was called ‘Amma’ by her fans and enjoyed a very illustrious life while she had it.

Kangana Ranaut was last seen in Judgementall Hai Kya & her performance was welcomed with open arms by the critics as well as the audience. Though that movie didn’t work well at the box office, her movie before that Manikarnika: The Queen Of Jhansi did well for itself despite being mounted on a high budget.

Poster of Thalaivi is out and we see Kangana Ranaut posing in the trademarked way of Jayalalitha.

Apart from learning Tamil, Kangana enrolled herself in Bharatnatyam classes for her role. She was also reported to have spent hours on prosthetic makeup sessions. Kangana also underwent prosthetic measurements for the role in the US.

The legend we know, but the story that is yet to be told!
Presenting #KanganaRanaut, in & as #Thalaivi. A film by #Vijay, arriving in cinemas on 26th June, 2020 pic.twitter.com/xw9lgujUMn

Posting on Twitter pictures in which the actress is seen covered in prosthetic glue, Kangana’s sister Rangoli wrote, “This is how measurements for prosthetics are taken, it’s not easy to be an actor. Kangana so calm in something, which is so suffocating for us to even watch.”

Hollywood-based prosthetics expert Jason Collins, renowned for films such as Captain Marvel and Blade Runner 2049, is working on Kangana’s look. Thalaivi will release in Tamil, Hindi, and Telugu. It is being directed by A L Vijay. Apart from Kangana, only Arvind Swami’s name has been confirmed in the cast. The film is scheduled to release in 2020.