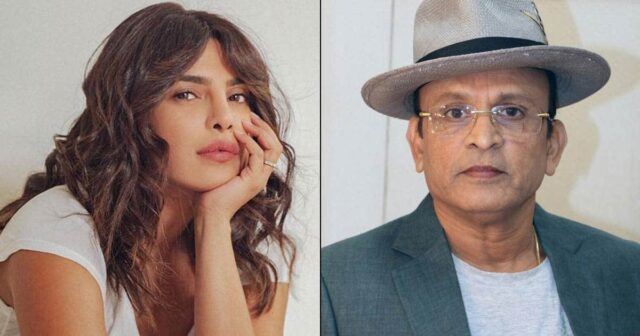 Priyanka Chopra starrer 7 Khoon Maaf created a lot of buzz when it was released back in 2011, as the film was filled with multiple actors and had quite a unique plotline for many. However, when Annu Kapoor in a promotional event allegedly said PC refused to do intimate scenes with him as he wasn’t good looking, his remarks irked the Krrish actor as she went on to slam the veteran star for saying such things.

While promoting 7 Khoon Maaf in 2011, Priyanka Chopra sat for an interview with Hindustan Times, where she was asked about Annu Kapoor’s statement, the Dostana star recalled, “I read that Annu Sir had said: ‘I’m not good-looking, I’m not a hero. Agar main hero hota (if I had been a hero), then maybe she would have done intimate scenes with me. Because otherwise, she doesn’t have a problem doing intimate scenes with heroes. If talent goes out of the window, I guess you just need to be good looking.’”

Priyanka Chopra then slammed Annu Kapoor for passing such ‘cheap comments’ and said, “If he wants to do intimate scenes and pass such cheap comments, then he should do those kinds of films. Such scenes were never part of our film. I’m very irritated. I don’t think unko aisa kehna shobha deta hai (saying such things doesn’t suit him at all).”

The actress further added that “I don’t think he knew that his comments would upset me. But, his statements have really upset me. It was very wrong of him to speak the way he did.”

Meanwhile, when the news portal reached out to Annu Kapoor to get his reaction on Priyanka Chopra’s statement, the veteran star said, “I have never ever uttered a single word for or against Priyanka, allegedly about her refusing to do any scene with me. It’s none of my business; it is between the director and her.”

He added, “When I’m asked about my feelings about playing her husband, I have said that people will judge my performance on merit rather than based on whether I’m playing husband to Priyanka or Meryl Streep. I may be a character artiste but I’m an artiste with character. My elderly advice to Priyanka: ‘Beta (Well, I do affectionately address her as beta), don’t take all this too seriously. Don’t get stressed. You’re a wonderful actress. God bless you.’”

On the work front, Priyanka Chopra who was last seen in Keanu Reeves starrer ‘The Matrix Resurrections’, will be next seen in Farhan Akhtar’s Jee Le Zara along with Katrina Kaif and Alia Bhatt.

Must Read: Aryan Khan’s Future Predicted By Astrologer: “He Will Prove To The World That He Is The Son Of Superstar Shah Rukh Khan”