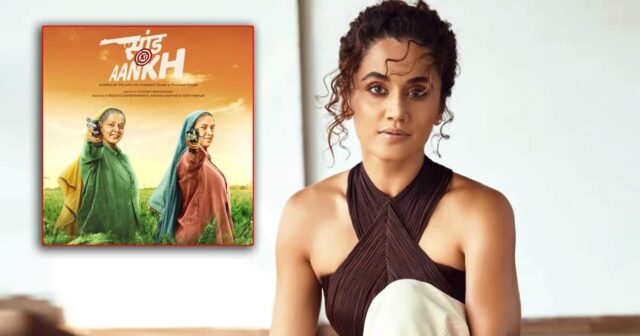 Taapsee Pannu is one of the most brilliant actresses in the Bollywood industry right now. She’s a one-woman show and has led female-driven movies like a queen while also making a social impact through the same on society. While she’ll be next seen in Rajkumar Hirani’s ‘Dunki’ opposite Shah Rukh Khan, we bring you a throwback to the time she opened up on playing an old character in ‘Saand Ki Aankh’ and slammed the trolls for targeting her to play a 60-year-old woman in the same. Scroll below to read the scoop.

Taapsee is one of the most brutally honest actresses and is never afraid to express her views on anything and everything. She once got into a nasty verbal altercation with Kangana Ranaut and gave it back to her in the most savage way. Coming back to the topic, Bollywood actresses are often slammed for portraying specific characters in films whereas actors have got it easy and can still romance a 21-year-old or a 50-year-old.

Saand Ki Aankh was released in 2019 and starred Taapsee Pannu and Bhumi Pednekar in pivotal roles. The film was based on real-life characters of ‘Shooter Dadi’ Chandro Tomar and Prakashi Tomar.

Both Taapsee Pannu and Bhumi Pednekar were criticised for playing old-age characters by netizens. Later in an interview with Deccan Chronicle, the Badla actress expressed her views on the same and said, “Ek kam karti hoon main acting karna chhod deti hoon (I will do one thing, I will stop acting), and only play characters of my age and girls from Delhi. We are actors, so should we stop acting? As an actor, I will sometimes play characters of different ages. We should stop being camera actors, I think. I know it’s not an easy visual, as these women pick up guns at the age of 60, and the film showcases their story from half of their current ages.”

What are your thoughts on Taapsee Pannu opening up on playing a 60-year-old in Saand In Aankh? Tell us in the comments below.

Must Read: When Asha Bhosle Got Annoyed By RD Burman Sending Flowers To Her Anonymously For Years: “Some Fool Keeps Wasting His Roses On Me”